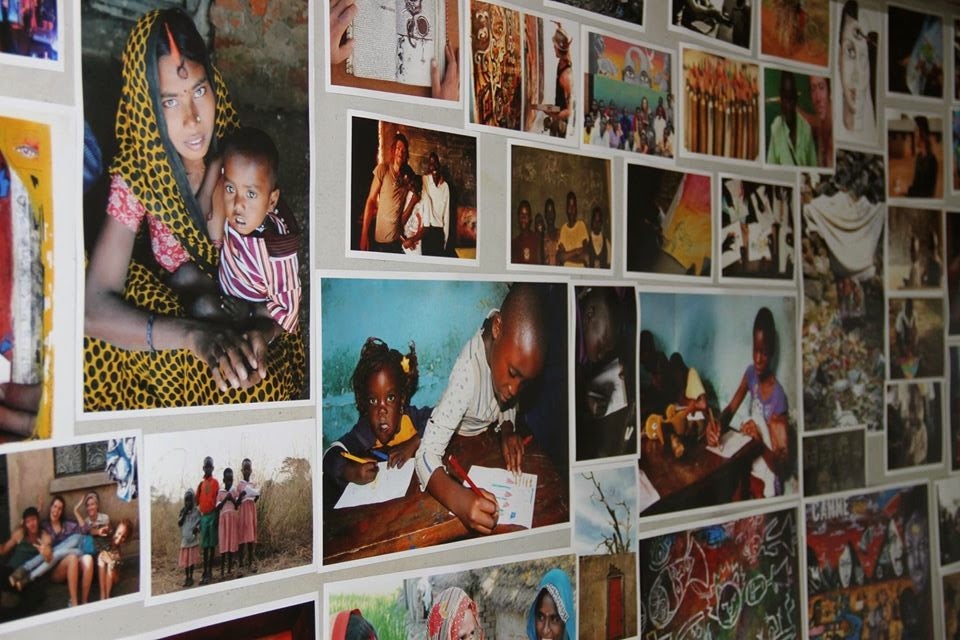 "What did you feel in the moment that you decided to risk your life and the lives of your children to stand up for your freedom?" Benjamin asked Tara during an interview. "Yes, we were scared, but as slaves we did not have a life; therefore, there was nothing to lose," She responded. This work tells the story of their new lives through paint.

There are 27 Million slaves in this world today. Debt bondage slavery imprisons entire villages throughout the Utar Pradesh region of North-Eastern India. With the assistance of the NGO Free The Slaves and Lloyd Callahan, the Bahari village found their freedom after countless of years enslaved in a brick factory. Benjamin Swatez and Satya Diana Grove were inspired to journey into the heart of India and share the freedom of expression with the beautiful villagers of Bahari. 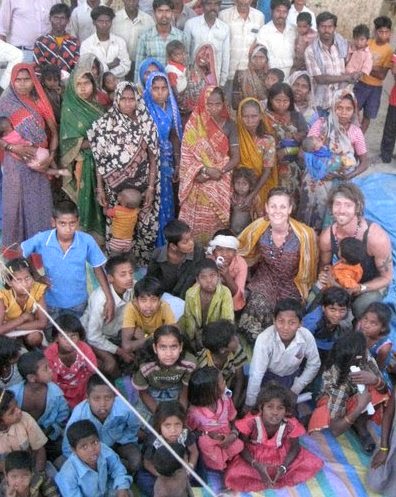 They are now free and wish to share their voice of freedom with the world. 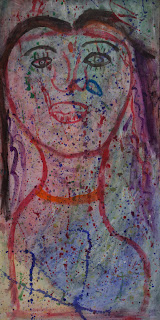 For one month Benjamin and Satya lived beside the people teaching art therapy. “We brought them paint and they reminded us of true freedom.” The courage within the eyes of those who lived through horrific circumstances is here to inspire us all. 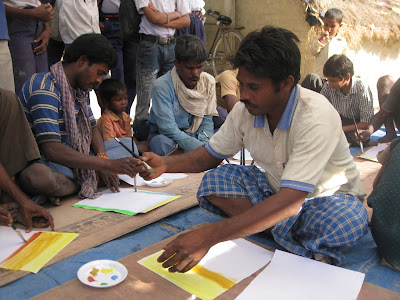 Never before had these former slaves touched a paintbrush, let alone had the opportunity to choose what they wish to do with their time. 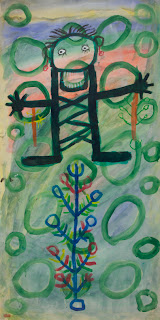 Benjamin has painted their portraits, using the colorful pigments of the Holy Week in Varanasi, India, to glow upon their faces as the celebration of freedom heals their soul. He has juxtaposed his work beside the work of Bahari, fusing worlds together. The tearful joy is written upon the canvas. Feel into the window of their soul, listen to the depth of their journey inscribed within the cloth of experiences and dive into the doorway of FREEDOM! 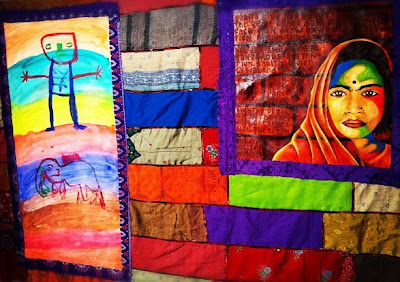 Through the tools of creative expression we explored the heart of freedom with the extraordinary people of Bahari. Time once again took a mind of its own as lifetimes of learning passed with each day. Three weeks flew by in light and love. 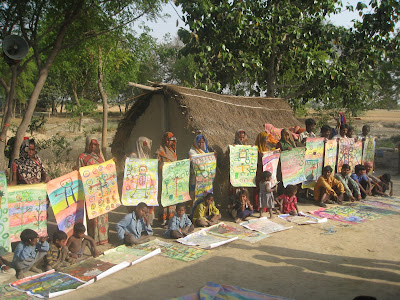 We presented our final project to the villagers four days before our goodbye. This would be their opportunity to share their voice of freedom with the western world. We were overjoyed to welcome every single villager to class on the first day. From the earliest age that could hold a brush to those with wisdom in their wrinkles, all were present, desiring for their story to be heard through paint. Let it begin! 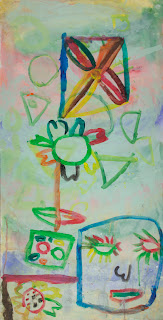 On the first day, we asked the villagers to lay the background using colors of their choosing. A whirlwind of colors flew freely, with no one holding back. Stripes and bold lines, water marks and splotches marked the canvases with freedom. It was an incredibly successful first day.

We were full of anticipation on the second day when we asked the community to paint a wash over their background in order to create a pastel effect. This would allow for greater contrast when their individual expression was painted over the top of the background on the final day. When a community volunteer took the brush from one of the grandmothers and, with good intentions, painted circles on her canvas, we were concerned. 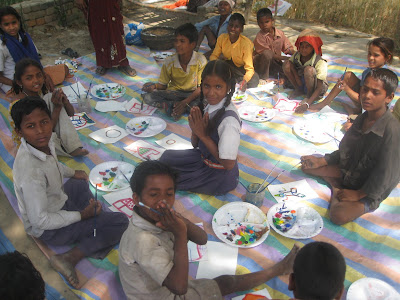 Without a translator that day, it was difficult to impart our intentions for these pieces to be entirely unique to the artist. Moments later our hopes fell further as the entire community began painting circles on their composition as well. 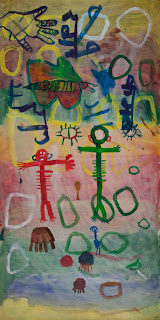 Admittedly, we were discouraged by this repetition as it directly conflicted with our western notion of freedom being synonymous with individuality. Even so, we maintained positive energy and an air of encouragement as the people shared their circled compositions with great pride in their eyes. It was important for us to continue creating a safe and loving environment despite the conflict with our preconceived notion of the freedom of expression. 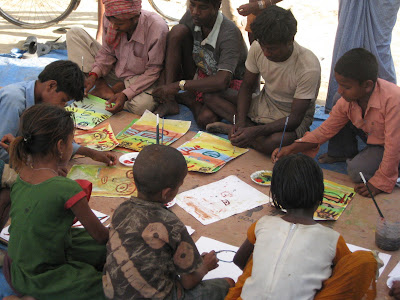 In these moments we realized that whether it be a wash, circles or painting a background, any guidance at all is a form of control. However, we believe that everything happens for a reason and trusted that this reason would reveal itself soon enough. 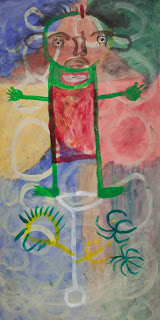 On the third day we presented the villagers with individual palettes of all colours and three new brushes of assorted sizes. As best we could, we expressed to the outsiders that no one is to assist the artists in any way, beyond helping get new paints and water. The only instruction was that there were no instruction. We were excited to witness the individual expression come alive atop the circles. 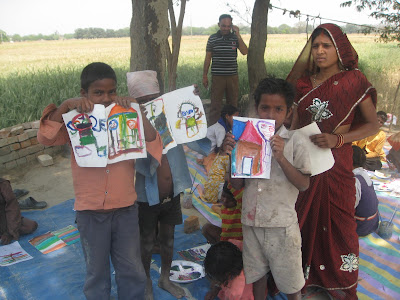 The children exploded with wild brush strokes. Each painting came alive as they drew sunshine rays, flowers, large-eyed faces and other interesting shapes. No holds barred. They were off and running, painting freely and loving it. As for the adults, we were anxious to see what they individually came to share on canvas.

Now that we had sufficiently set the stage for individuality, we anticipated just that. However, the adults once again began painting the very same image -a man, arms spread wide. We learned that this man was in fact a scarecrow. They were painting scarecrows. All of them. It was astonishing for us to witness and powerful for us to analyze the possible reasons for their choice. 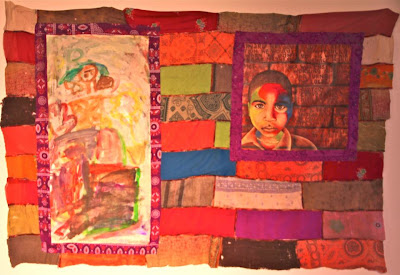 Agriculture is their lifeblood, the very core of their subsistence. The scarecrow protects their land and their livelihood. Another interpretation is that during their time of enslavement, the scarecrow was the only representation of a protective, non-threatening human presence.

We also came to see with the likeness of their work was not necessarily a depiction of their suppression but rather a indication that they think and act as a unit. These people have been enslaved together, they found freedom together, they are building their houses together and now they are painting together. As well, they have been consciously guided by Free the Slaves’ partners that their unity is their power. Beautiful. We began to look at their compositions with entirely new eyes. 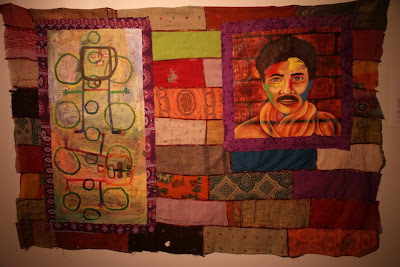 We began to see beyond the scarecrow icon itself to the details of their work. One woman drew the outline of her hand with palmistry lines indicating that she is in control of her destiny and with fingertips extended out toward the word ‘lotus’ in Hindi. The lotus flower is the Indian national flower and blossoms with roots embedded in the mud. Another woman drew her home with rainbow bricks surrounding a large white square of hope. The work was truly stunning and very unique in its detail. 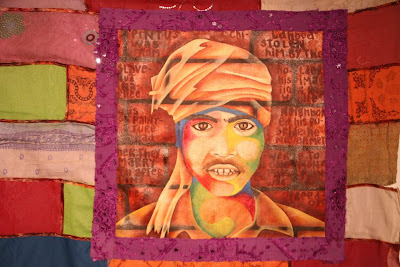 The value of the insights we are bringing home with us is incalculable. This project has provided a unique opportunity to dive into the human psyche and explore the various manifestations of what it means to be free. Bahari has shown us the tremendous strength and beauty of unity. 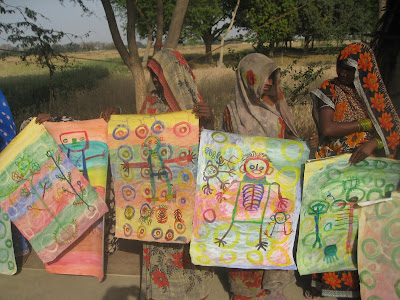 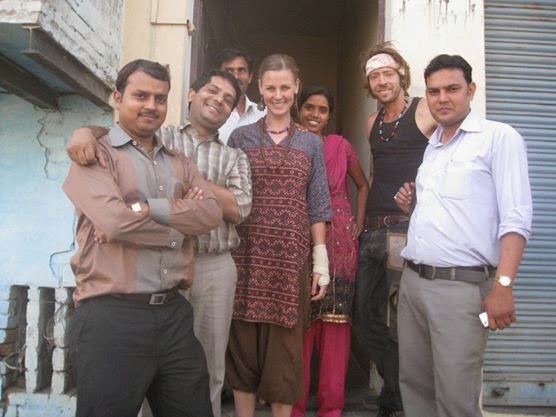 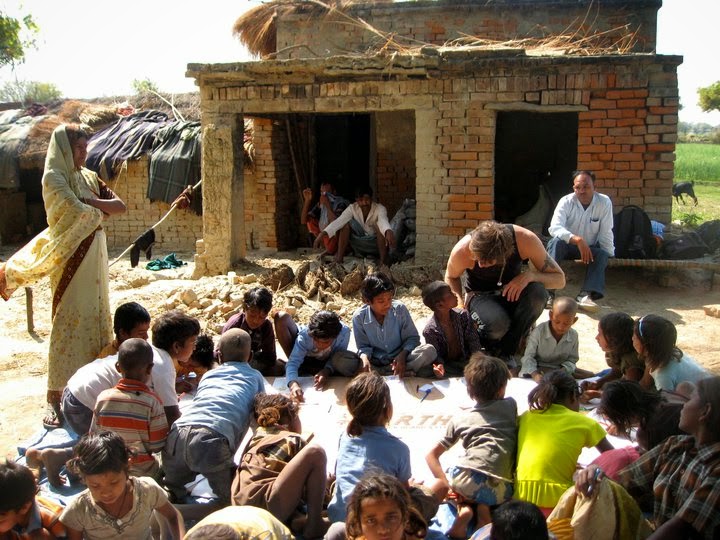 We have now shared the art work of Bahari, India, and Benjamin Swatez in international art exhibitions in Los Angeles, California, - Santiago, Cuba - Barquisimeto, Venezuela - Bogota, Colombia - Tunuyan, Mendoza, Argentina - with many more locations on the horizon. The intention is to educate the world about modern day slavery and inspire humanity to do something about it!