Fusions of the Forgotten Moment + Power of Choice 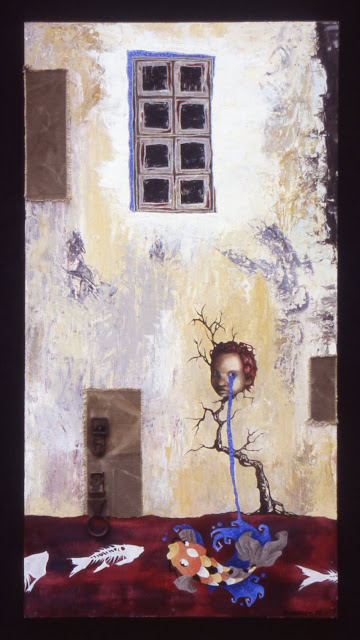 In December of 2006 I returned to the place of my birth, Humboldt County, California, to visit my family after living abroad for many years. I had little intention of staying; however, life had another plan for me. I fell asleep one evening at my brother's home and I entered into a premonition of what was to come. I dreamt of 3 paintings created by my hand hanging on the wall of a gallery with the title printing in large black, block letters above them. "Fusions of the forgotten moment - May 2007". 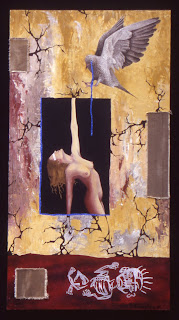 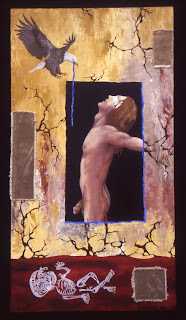 "Surrendering Woman & Surrendering Man" - Oil on Masonite + canvas from a military bag I found after the war in Bosnia. Even when war and suffering is all around us, we have the power of choice... the choice of our perceptions. 12 x 24 " - 2007

I awoke, sketched out the 3 paintings above and called the founder of the "Accident Gallery" in old town Eureka. I went to the space, it was the same from the dream... and when I explained what I must do and why, May 2007 was reserved for my show on the spot.
Note: All wood, masonite, nail, canvas, and oil paints have been recycled. They bring to the paintings their own "forgotten" moments.

I moved into a little cabin in the redwood forest beside the singing, nocturnal owl of Arcata, trading rent for work in the garden. My brother and I would surf in the mornings from time to time and once a week I would ride my Amsterdam racing bike into town to buy groceries; other than that, nothing could distract me from my world of colors. During these five months I painted out my inner pains, suffering and demons. It became clear that it was time to let go of that for which does not serve me any longer. Running away was not the answer; looking them straight in the eye with love was my salvation. "Thank you for journeying with me up until this point in my life. I am who I am because of my choices in every moment and you have been a great teacher. I would not trade one moment, 'good' nor 'bad'. It is time for us to move in different directions. Go in peace."

The "Potato Eaters" - paying homage to Van Gogh - was the last painting to refinished before the exhibition in the Accident Gallery in May. I was painting outside with the birds singing and rays of light penetrated through the high canopy... And then the phone rang. I ran inside to get it. It was my sister Ariel. I returned to my work shortly thereafter to find this painting on the ground with a piece of metal puncturing straight throughout it... 3 days before the opening. "What do I do?" I asked my carpenter friend to help me patch it up, but even still the texture was different than the rest of the painting. I knew there was a solution. I stared at the painting for hours, meditated with it, talked to it and then finally it clicked. The patch work is the shape of butterfly wings without a body. When we choose to fly, we are the body and the wings are waiting for us... and so it is. The two elderly are from Bosnia and found happiness beyond the tyranny. The older sister orphan is feeding the younger a spoon full of light. The sky is their clothing. The guitar emerging from the 'Potato Eaters' mouth is the rhythm within the tree of life that connects all, below ground and above. The boxes of light are our choices to transform the pain we carry on our heart cave into love. 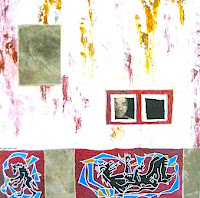 With so much love and gratitude to my family, the Price-Hall family, the Curcic family, The Reynaud family, Accident Gallery, and life itself... I thank you.  2007 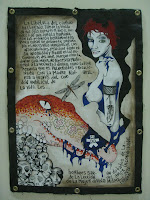 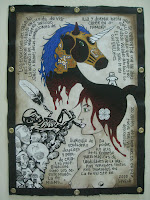 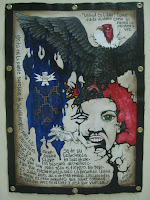 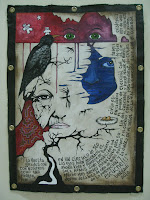 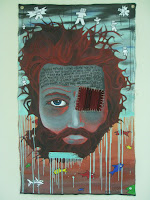 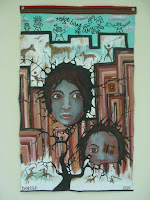 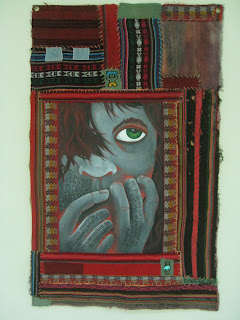 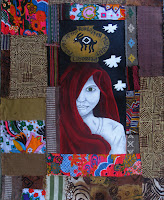 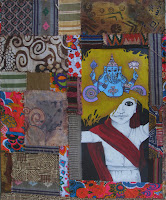 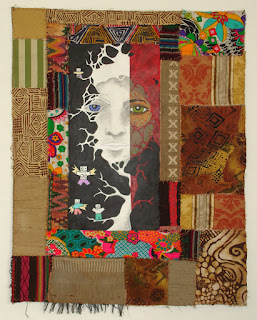 Reflections on New Orleans after Hurricane Katrina and Bosnia after the war:

I journeyed to New Orleans just after Hurricane Katrina to film the recording of the "Freedom Song" with Luc Renaud and the children of the Red Cross shelter in Baton Rouge. We entered into the city to help tarp roofs within a 14 block radius of darkness... no electricity, an 8pm strict curfew, a horrible stench in the streets and looting. During this time we took turns on watch through the middle of the night. We were passing out cleaning supplies, food and clothing thanks to this renegade project of "misfits" with the largest hearts! One day while driving through town in our Red Cross vehicle I spotted a tricycle hanging from the witch like tree limbs. Although it was a very tough experience to see the positive for most, it was the soul of the music and the innocence of the children who were the true alchemists on site!

In 2005 I journeyed to Sarajevo, Bosnia with Danica Curcic and Kirsten Holstrum to film a documentary about the youth voice in the streets after the war, called "Revival". There we helped reopen Eastern Europe's largest youth house after it had been bombed in 1992. As we were filming at 3am 4 boys, 13/14 years of age, spray paint over bombed buildings, we interview one and this is what he said, "Some people make art with brush and oil, we use spray. They call us vandals, but we are just trying to find something familiar in this fucked up world." - The buildings in this painting are real buildings of Sarajevo, bombed in the war between 1992 - 1996. I painted this while living in the caves of Granada, Spain beside the Eastern European gypsies and found this frame in the streets. I fire danced in the streets to live and pay for my plane tickets to and from Former Yugoslavia.
Home
Subscribe to: Posts (Atom)